Fort Washington and the Park

The park sites an important question for us: “Why watch over Fort Washington, PA as a place to live in?” This watching over can be claimed to be something crucial because it points back to the activity in the park on the days dating from September 1 to October 31, known as “Hawk Watch”, where people get to see 16 unique kinds of migratory birds passing towards the East Coast. And precisely, this almost rare occurrence in the use of the term, occasional during such days when watching the birds of prey, mirrors the state of Fort Washington as a significant place among others. Fort Washington and the Park are two locus terms that go hand in hand together. But aside from the Park’s event, the question can still be answered further. Fort Washington, PA is a census-designated place and is proven to have low crime rates, stable housing market, high graduation rates, and high income per capita. We don’t have to be acquainted over the whole percentage thing. It is enough to know that Fort Washington, according to reviews, is 83% recommended as a place to be lived in. But in honor of the Park’s allusion to watching over, a look on its education, food and recreation parks is imperative before you can decide on which home that is for sale in the Fort Washington, PA area will be your next place of residence.

Education Providers to watch over in Fort Washington, PA

Within the vicinity, there are 18 schools, but if one counts the Preschools like the Children’s House Child Care Center-Horsham and First Steps Child Care in Upper Dublin, plus the State-funded online school with the K-12 educational system, the Agora Cyber Charter School, we will come up with a total of 21. In the elementary level, the highest enrolled school is Germantown Academy, probably because it also includes middle schoolers and high school students, but Fort Washington Elementary School ranks the 10th in test rating. In the high school level, Upper Dublin High School ranks 8th and at the same time outnumbers the Germantown Academy.

Food to watch over in Fort Washington, PA

It is quite a lot since there are 18 food and beverage establishments in the area. Cantina Feliz at 424 South Bethlehem Pike, a Portuguese name which means ‘Happy Canteen’, serves Mexican cuisine and remains to be the top ranked restaurant. Second in line is the Hungry Bear Café at 429 South Bethlehem Pike that serves American food with the label ‘hidden gem’, as far as the reviewers of the place are concerned. The choices could go on: Magerk’s Pub with its great menu, Zake Cakes & Café with its Summer Berry Cake, and Rich’s Delicatessen with its Cheese Steaks. Clearly, this variety of food choices is worth the watch among the restaurants in Fort Washington, PA.

Recreation Areas to watch out for in Fort Washington, PA

Here’s the thing about Fort Washington and the Park. The Park may be specifically referred to as the Fort Washington State Park, but it also presages the idea that the Fort Washington itself is a park, a home of parks. There are, surprisingly, 14 parks close to Fort Washington, PA. So, aside from the famous local park, there are many more like the GATSME Model Railroad Club at 316 Madison Avenue, the Fort Foote Park, Atlantic Kayak, the Accokeek Farms at Piscataway Park, the Tucker Road Ice Rink, and so on. These are not even local recreation areas. These are attractions to the place that may fascinate not only tourists but future residents. With all these stuffs lying around Fort Washington, PA, watching over is surely tempting and sounds exciting! 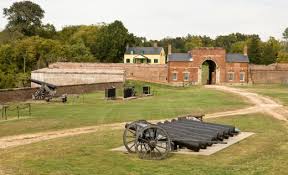