Erdenheim means, from its German origination, “Earthly Home”, and was named for Erdenheim Farm in 1892. Previously, the area was know simply as “Wheelpump”, from the historic Inn on Bethlehem Pike.

Erdenheim, PA has many visible reminders of it’s history, including the Springfield Mill and the Daniel Yeakle and John Faber Miller Houses, declared by the National Register of Historic Places in 1976 and 1992 respectively. 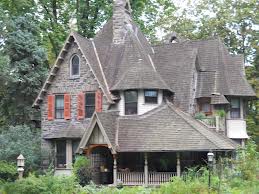