Sometimes, one can get lost with the long list of communities and towns in Pennsylvania, not just with the boundaries itself. But certain places do stand out and make one stop by, and better yet, consider moving there. That is not surprising with the ever lively and equally culturally enriching Chestnut Hill, PA in Philadelphia. The zip code 19118 is mostly synonymous with the place. Many passerbys eventually fall in love with the beauty and stability of life that Chestnut Hill, PA has to offer, that they end up relocating to the place by buying a home that is for sale in Chestnut Hill, PA. In real estate terms, this is not a bad move since this historic community in the north is simply one of a kind.

For years and years now, Chestnut Hill, PA has seen great things over the passage of time. Geographically speaking, the borders of Chestnut Hill, PA are as follow, The Northwestern Avenue up north, the Wissahickon Gorge to the west, Stenton Avenue on the eastern border and the Cresheim Valley down south. In historic times, Chestnut Hill, PA served as an entry between Philadelphia and some major farmlands, and was considered as one of the more upscale part of Philadelphia. The opening of the railroad in the past made it easier for everyone to travel to and from Chestnut Hill, PA and perhaps largely contributed to its rich past. When you go around the community, even today, you can see several prominent 19th and early 20th century edifice that is uniquely that of Chestnut Hill, PA. This is no other than the Chestnut Hill Historic District. The following landmarks in the Historic District made it to the National Register of Historic Places in 1985, and is a source of pride and inspiration to the residents of Chestnut Hill, PA. First, the Anglecot, which was built in the 1800 and is more popularly known as the Potter Residence, for Charles Adams Potter, a linoleum maker. 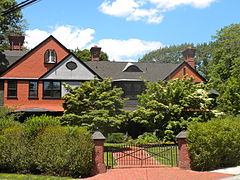 The school decided to retain many of the original parts of the Inn up to the present.

The other significant attractions that made it to the renowned list in Chestnut Hill, PA are the Druim Moir Historic District, Garver’s Lane Station, Inglewood Cottage, and the Vanna Venturi House among others.

Anybody to have ever set foot in Chestnut Hill, PA would truly feel blessed to have seen such important and ancient pieces of architecture.

Although Chestnut Hill, PA is synonymous with history, the transportation in the place is also quite commendable. Nobody would have a hard time going in and around town, or even to nearby places. Chestnut Hill, PA is served by the SEPTA train line and buses, and they even have trolley trams. The latter has been around since 1894 and continued to serve the public until its rebirth in 1992 after being briefly suspended.

Several notable public and private schools can also be found in the Chestnut Hill, PA area. Students are either zoned to the John Story Jenks School for the younger schoolgoers, while those from grades 9 to 12 goes to the Martin Luther King High School. Among those schools in Chestnut Hill, PA belonging to the private sector, the Springside Chestnut Hill Academy stands out from the rest.

Sometimes, life is not all about fun and pigging out. Living in Chestnut Hill, PA will give so much meaning to your life and also help you raise culturally aware children.